Diversity and inclusion research has shown how each of us harbors subconscious biases, whether we like it or not. When we see an individual who’s outside of our normal conscious awareness, we hold stereotypes about them. If two identical twins stood next to one another, one wearing a suit and the other wearing a construction harness and hardhat, which would you assume made more money?

Of course, many of us would assume the twin in the suit made more money. What we don’t know is that our suited twin has over $200,000 in college debt and has trouble getting hired in his field of expertise, which he worked over a decade to achieve. The twin in the hardhat? He’s steadily paying back his credit card debt and getting paid while earning an Associate’s Degree in Construction Technologies. Both twins have worked hard and should earn only the best – but right now, our economy’s workforce demands are in construction’s favor.

Apprenticeships in skilled trades have long been stigmatized. Even though apprentices can earn 4-year degrees, careers in the building and finishing trades are often thought of as “less than” by many parents and higher education institutions. But thought leaders in higher education are beginning to change their tune. Students are looking at their higher education options closely, and weighing their benefits based on results, not outdated stigmas.

In the past few years, local high school counselors have begun to push apprenticeship programs like ours at Finishing Trades Institute of the Upper Midwest to students in the same ways they’ve been pushing traditional colleges for decades. Despite the challenges COVID-19 has brought to the table recently, students are thriving in the hybrid hands-on and classroom programs, and eager to launch their careers in the finishing trades after they graduate high school.

The average annual salary in Minnesota is about $62,876. Many parents and counselors are surprised when they learn that the average salary of an FTIUM graduate is above the state average, at about $70,000 per year. Students also learn and experience the real expectations and demands their career will have. If it turns out to be something they’re not interested in long-term, they can make that choice early on before they accrue unnecessary student debt.

Some say that there isn’t much job mobility in the finishing trades, and that apprentices will get stuck in a career path that becomes under-stimulating over time. This assumption couldn’t be further from the truth. Apprentices can climb the ranks to journeypersons, and with the support of a union, can become foremen, project managers, and get business training in order to become contractors and start their own companies.

Our predisposed ideas about blue-collar workers are still stuck in the 19th and 20th Centuries. Because blue-collar workers, construction firms, and unions are fighting to keep our economy afloat during a pandemic, many locals are starting to open their eyes to the unsung heroes of our economy. Not only are these workers deemed essential, but they’re still creating technological innovations that will make our region safer to live in during and after COVID-19. 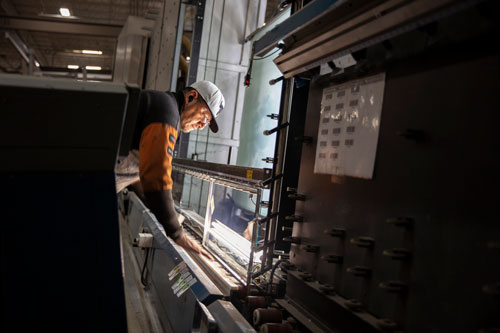 Subconscious biases are shown to change over long periods of time. Once it’s widely known through generations that careers in the finishing trades are lucrative and require extensive knowledge and technological expertise, the bias will change. Once federal funding is granted to infrastructure projects, finishing trades workers will be the ones responsible for fixing hundreds of long-overdue safety issues that have plagued our nation for decades.

Instead of our workforce being at a deficit like it is now, traditional higher education institutions will need to compete with Career Training Education (CTE) and prove that their offered paths can provide as much success. Slowly but surely, the education industry is opening its eyes to apprenticeships and CTE and the benefits that they provide, like ongoing training and support after graduation, industry job leads, and the security that comes with union membership; benefits that many traditional higher education institutions severely lack.

John Burcaw is the Director of Academic Education at the Finishing Trades Institute of the Upper Midwest.

Finishing Trades Institute of the Upper Midwest is an educational institute dedicated to developing professional tradespeople, advancing their skills and certifying their qualifications in the Upper Midwest. Our learners include Commercial and Industrial Painters, Drywall Finishers, Glaziers, Glassworkers, Sign and Display Technicians, and Tradeshow Workers.

ATTN: The FTIUM is applying for a reaffirmation of accreditation with the Commission of the C.O.E.

The Finishing Trades Institute of the Upper Midwest is applying for a reaffirmation of accreditation with the Commission of the Council on Occupational Education. If a person wishes to make comments about this reaffirmation, please write to:

Executive Director of the Commission

(Persons making comments must provide their names and mailing addresses.)